Cathartic and hauntingly beautiful, Henryk Górecki’s Symphony of Sorrowful Songs is an astonishing meditation on loss and transcendence.

Each of the three movements of Symphony of Sorrowful Songs features a Polish lament, including a message inscribed on the wall of a Gestapo prison cell from a teenage girl to her Mother, and a Mother’s folk song about her son lost in the Silesian civil war. Sung in Polish, it’s an evocative work that brings both tears and joy, taking audiences on an uplifting journey through grief and solace. A recording by soprano Dawn Upshaw and David Zinman with the London Sinfonietta topped the classical music charts and reached number six on the mainstream U.K. album chart and selling over a million copies

Charles Hazelwood explains the passion and purpose of this musical installation “What better place to share this work than Bath Abbey? Deep within this astonishing and magical space the orchestra will be placed right in the centre of the nave, in a circle, facing inwards. Like all our projects, making orchestral music accessible and presenting it in new and unexpected ways is fundamental.” This style and performance set up encourages you to move around the orchestra and explore the abbey, observing and listening to the music from different perspectives for a fully immersive experience. 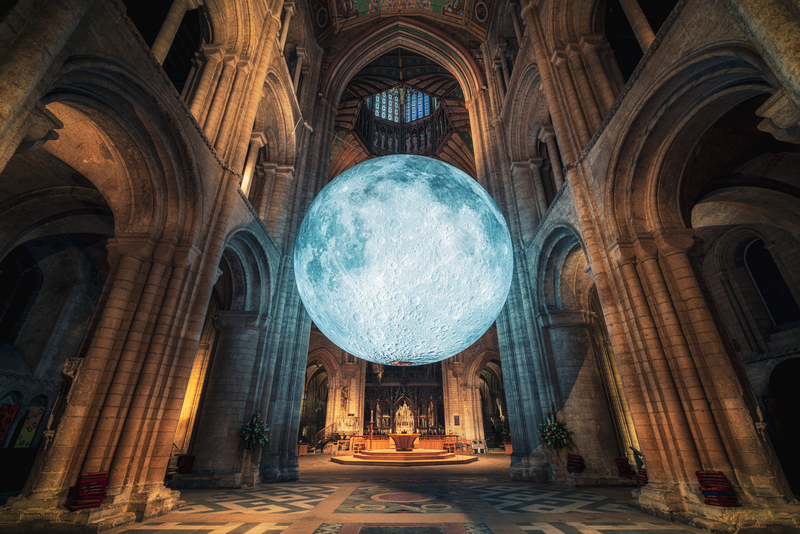 As part of its footprint project, Bath Abbey has under gone magnificent renovation and change over the last few years, repairing it’s collapsing floor, removing the majority of pews and discovering more of its hidden secrets. Read more about the Footprint Project Enhancing the performance will be the Museum of the Moon, which will be centre stage at Bath Abbey. The touring piece of artwork by Luke Jerram has been making an impact all over the world. The internally lit moon measures seven metres in diameter and features detailed NASA imagery of the lunar surface. Find out more about the Museum of the Moon

Bristol-based Paraorchestra create large scale and dynamic music experiences,
blending artforms and technology to create innovative new ways of experiencing orchestral music. They are as at home playing Philip Glass’s Heroes Symphony headlining a main stage at Glastonbury Festival, or taking a 70-piece ensemble playing banging pop tunes through the streets of Bristol, as they are filming a secret gig with Brett Anderson, or Beethoven’s 5th Symphony for Sky Arts broadcast.

Their ensembles feature professional disabled and non-disabled musicians,
playing a mix of analogue, digital, and assistive instruments. Paraorchestra are not only radically changing who connects with orchestral music, but, shifting the perception of disability by removing the outdated barriers that too often prevent a showcase of excellence in disabled players.